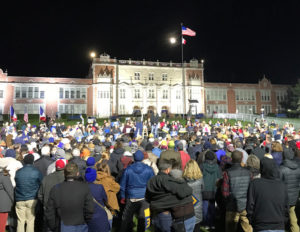 “When I’m president, the United States in the world will not just be one more country scrapping for advantage like all the others,” Buttigieg said. “We will restore US leadership and credibility before it is too late.”

Buttigieg and other Democratic presidential candidates campaigning in Iowa this pat weekend expressed horror at Turkey’s invasion of Syria. Buttigieg accused President Trump of betraying Kurdish allies in the region.

“What we are seeing is a fast, unfolding process that betrays the core strength of America, which is that we are a country that had been perceived as a country that could be counted on by our allies and our adversaries,” Buttigieg said. “When we loose that, there is a terrible price to be paid and it makes America less safe.”

Buttigieg, a former Navy intelligence officer, did a tour of duty in Afghanistan. California Senator Kamala, a member of the Senate Intelligence Committee, told reporters what’s happening in Syria is the result of “irresponsible behavior” from President Trump.

“It is yet again another display of Donald Trump’s inability to understand the role and responsibility of commander-in-chief, which includes standing with our allies,” Harris said following her appearance at a neighborhood block party in Des Moines.

The Kurds have been left “open to slaughter” according to Harris.

“This is, yet again, another display of Donald Trump’s unilateral actions based on unknown motivations,” Harris said, “but clearly not being motivated by America’s national security and our interests in maintaining our security through the relationships we have around the globe.”

Former Vice President Joe Biden described the situation in Syria as “an absolute disaster” as ISIS fighters escape prisons that had been guarded by the Kurds.