You are here: Home / News / New Mississippi River bridge at I-74 is on track despite rumors 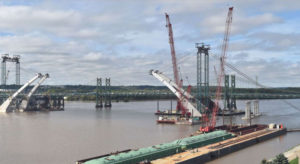 Construction of the new Interstate 74 bridge over the Mississippi River in the Quad Cities was making good progress this year until repeated flooding caused multiple delays.

Project manager Danielle Alvarez says they are making good progress, as the four starting points for the huge arches are now in place, which she says is the most complicated part of the project.

“We’re trying to make sure all four of those lines hit the same point 400 feet out, over 100 feet in the air — in the middle of the river,” Alvarez says. “We’re definitely taking some time with our measurements and procedures that we’ll use to set the pieces to give us our best chance for success as we continue with the erection of the arch.”

The bridge project team produced a video called, “We Heard a Rumor,” to dispel gossip that the alignment of the arch pieces is way off. It’s not. If there’s some dry, warmer weather, it would allow the arches to be completed before winter.

“We see the arches start to form, we can see what shape they’re taking,” Alvarez says. “We’ve got a lot of work on the bridge approaching the arch. Even though we are facing these challenges, we’re still making good advancements in the work on land and we’re also working on eastbound out there in the river as well. We’re still out there doing things and people are seeing progress.”

The $1.2 billion span between Bettendorf, Iowa and Moline, Illinois is expected to take three-and-a-half years to complete.