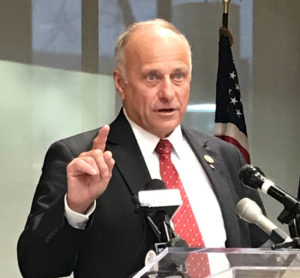 The attacks target Kurds who are allied with the U.S. in the fight against ISIS. King, a Republican from Kiron, says Trump is simply following through on what he said he’d do should Turkey continue on its destructive path. “I remember the president said, when he ordered the removal of the 50 troops that were apparently in harm’s way up near the Turkish border, he said that if the Turks overplay their hand, he will wreck their economy with sanctions,” King says. “I think he’s in a position to do that. He seemed to be very confident there.”

President Trump’s executive order halts a pending $100 billion trade deal between the U.S. and Turkey, while raising tariffs on Turkish steel and imposing a series of sanctions. King says he doesn’t have a lot of faith that you can “do business straight up with Turkey.” King says he’s met with Turkish President Erdogan for sit-down negotiations in the past. “I spent 90 minutes looking into his eyes while he went off on a diatribe, through an interpreter, and I came out of that meeting thinking he’s unhinged,” King says. “He’s capable of about anything and he’ll do something to keep his hand on the power levers in Turkey.”

King says Erdogan has made it clear through his actions that he hates all Kurds, not just the ones he’s labeled as terrorists. “I’ve supported an independent Kurdistan, I think that’s a better way to bring long-term peace into the Middle East,” King says. “I’ve been in and out of that neighborhood — not in Syria, but the places next to it — a number of times and yet, the path doesn’t seem to be there.”

King says it appears Erdogan wants to carve out a 20-mile-wide path between Turkey and Syria where he wants to place Syrian Arab refugees as a buffer zone to keep the Kurds away from the Turkish border. King made his comments Monday night in Fort Dodge, following a GOP fundraiser. He’s flying back to Washington, D.C. today.