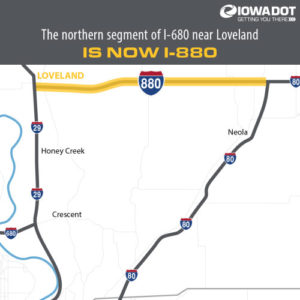 The Iowa Department of Transportation is renaming of the northern segment of Interstate 680 in western Iowa to try and end confusion for travelers in southwest Iowa.

The DOT’s Scott Suhr says that part of the highway is now called 880. “It’s the section that runs from Interstate 80 to I-29 on the northern part of Pottawattamie County, ” Suhr says. “Part of the reason for the designation is because when we have an event or detour or any kind of situation where we need to describe what part of 680 is closed — it gets confusing to the motorist — because we have two separate segments of 680 that are ten miles apart.”

Suhr says changing the number designation is an easy way to solve the problem. “The northern portion of 680 is now going to be 880. And the portion that goes from I-29 into Omaha and than ties into 680 in Omaha — so that segment will remain 680,” according to Suhr.

He says they have ordered signs with the 880 designation on them and are working to get word of the change out. “We’ll have dynamic message boards in place and changeable message boards in place notifying the public that 680 is now 880,” Suhr explains. “We have notified the navigational companies such as Google and Garmin…so it make take a couple of weeks for their apps to activate to 880 — but everything is kind of getting started that way.”

He says the number is the only change for that section of highway. “It’ll still remain an interstate. It’ll still be under our jurisdiction in Iowa,” Suhr says.

Suhr says the best way to find out any information on roadways and conditions is to go to the DOT’s 511ia.org site.