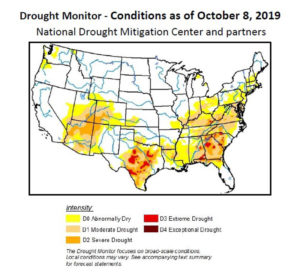 Iowa’s weather has been a series of extremes in recent years, switching from drought to flooding and back to drought.

Just this year, we’ve seen both ends of the moisture spectrum. Last month was the 15th-wettest September on record for Iowa and according to Tim Hall, the DNR’s hydrology resources coordinator, the heavy rains removed all signs of drought.

“We had a somewhat dry set of summer months and we were heading into what was a concerning situation in the state in terms of growing dryness and drought,” Hall says. “Obviously, it’s been really wet recently. September was a wet month. It chased all of the drought conditions out of the state.”

Even with the very wet and cool spring, which brought record flooding to parts of Iowa, the weather did an about-face during the hot and dry summer, but then reversed course yet again. “Now, we have no dryness or drought in the state of Iowa at all, as rated by the National Drought Mitigation Center,” Hall says. “In fact, the whole Upper Midwest is free from drought, but we have a lot of water out there and there’s some ongoing concerns over major river flooding and what that might bring for us into the future.”

Extreme weather patterns are often cyclical for blocks of years at a time, Hall says, citing how the Dust Bowl period of the 1930s saw eight years out of ten be exceedingly dry. “A really dry year tends to push the conditions into being dry the next year, just because the lack of moisture tends to raise the temperature and tends to make it drier,” Hall says. “We get locked into this wet pattern and other than the summer months this year, we didn’t really see much relief from the wetter-than-normal conditions.”

It’s very much a good news/bad news situation, according to Hall. While our current conditions mean Iowa is headed into winter in good shape from a groundwater perspective, it also means many areas are on the cusp of facing flash flooding with just one good rain.