You are here: Home / Human Interest / All Iowa Reads author tours state with his farm-based book 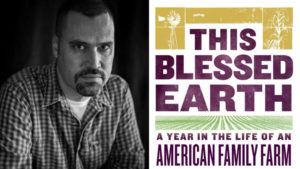 The author of this year’s choice for the All Iowa Reads program is traveling across the state this fall.

Ted Genoways wrote “This Blessed Earth: A Year in the Life of the American Family Farm.” The book chronicles the lives of a Nebraska farm family as they face dramatic shifts in the agriculture industry.

Genoways says generations of the same family had farmed that land since the 1870s. Genoways says, “The thing that I was interested in trying to do was tell the story of those families who have been in a spot for 100 or 150 years who are facing a rapidly changing industry and global market as they’re trying to hang onto and steward that legacy at the same time.”

The goal of All Iowa Reads is to create a sense of unity through reading by encouraging Iowans to come together in their communities to read and talk about a single book title in the same year. Libraries, book clubs, schools and other local organizations are encouraged to sponsor discussions of the title.

Genoways spent a year on the Nebraska farm, from the harvest of 2014 through the harvest of 2015, just as the bottom started falling out of the commodities market.  “This particular family was of interest to me because they were in the midst of that generational transition,” Genoways says. “The father of the family was getting ready to try to hand off the portions of the farm to his kids and hopefully, carry it on to the future generations.”

The patriarch of the family, Rick Hammond, said their farming operation could endure the commodities crush, as long as it didn’t last more than a few years — which it did. “It’s been an extremely difficult stretch of time,” Genoways says. “Rick said to me at the time that his greatest fear, his nightmare, was a farm sale, just the idea of having inherited so much from previous generations and to have it all come to nothing and be something that was parted out and sold to others.”

Genoways says the farm has struggled but managed to endure the hardships of the past several years. A fourth-generation Nebraskan, Genoways used to live in Iowa City and got one of his degrees from the University of Iowa.

Following an appearance last week in New Viriginia, Genoways will give a talk tonight  at the Webster City Public Library, with more appearances scheduled October 30th at the Asbury Branch of the Dubuque County Library District, and November 6th at the Sidney Public Library.