You are here: Home / News / Buttigieg, Biden, Harris campaign in Iowa after debate 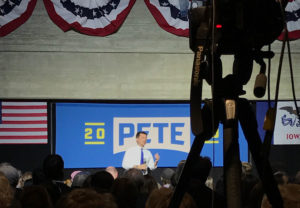 About 900 people crowded into a building on the Iowa State campus in Ames tonight to see Democratic presidential candidate Pete Buttigieg.

“Politics isn’t about the big show that’s going on in Washington. It’s not about who had the best debate zingers, although I’d like to think my debate performance was pretty good,” Buttigieg said, to cheers.

“I feel that Pete really understands what the country is wanting for change,” Liston said.

Liston was in the front row at Buttigieg’s rally in Ames tonight, alongside Tammy Wirtz of Ogden. Wirtz said Buttigieg proved he would hold his own in a debate against Trump.

“When he talked about being a soldier, I think that’s huge,” Wirtz said. “…He has knowledge that Trump does not have for what he’s got us into now.”

During Tuesday’s debate, Buttigieg sharply criticized President Trump’s decision to “abandon” Kurdish allies in the region — and he discussed that moment during an interview with Radio Iowa late this afternoon.

“It’s probably a good thing that people know I can and do get fired up about things and not to mistake kindness for weakness,” Buttigieg told Radio Iowa. “The idea of respect is extremely important to me. It’s also important to be firm and clear about what we stand for.”

According to Buttigieg, the American operation in Syria that’s been dismantled was working.

“A very small number of special operators were keeping the peace,” he told Radio Iowa. “It was actually a good example of that doctrine of the lightest possible footprint to have the biggest possible impact because literally a few dozen U.S. military members stood between us and ISIS and the beginning of a possible genocide. You take that out and it’s like taking control rods out of a nuclear reactor.”

Two of the questions Buttigieg fielded from the crowd in Ames tonight were about Syria.

Two other presidential candidates campaigned in eastern Iowa today. Former Vice President Joe Biden told a crowd of about 150 in Davenport the withdrawal of U.S. troops from Syria has wide-ranging repercussions.

“It’s more insidious than the betrayal of brave Kurdish partners. It’s more dangerous than taking our boot off the neck of ISIS,” Biden said. “Trump is demolishing the moral authority of the United States of America.”