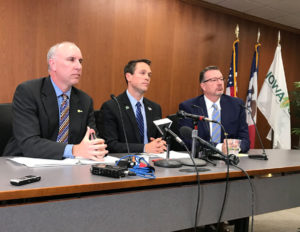 Leaders of Iowa farm commodity and biofuels groups held a news conference today to call on President Trump to force the EPA to follow the deal on ethanol and biodiesel that Trump struck with the industry a dozen days ago.

“I’ve known this farmer well,” Floss said. “He never uses inappropriate language, nor would I in this kind of setting, but I think this says it all: ‘No more Iowa Nice. Now, it’s Iowa Pissed.”

Floss warned thousands of farmers who invested in ethanol and biodiesel plants will go out of business if the EPA plan stands. Grant Kimberly, executive director of the Iowa Biodiesel Board, agrees.

“This is likely to inflict further damage on the already-struggling biodiesel indusry and farm economy,” Kimberly said.

Iowa Renewable Fuels Association executive director Monte Shaw said the EPA draft for implementing the ethanol and biodiesel mandates over the next three years will create an economic crisis.

“I thought a deal was a deal,” Shaw said. “When Donald Trump makes a deal, isn’t it a deal? Well, we had a deal and it’s time to stick to the deal.”

Kelly Nieuwenhuis, a farmer from Primghar who is board president of the Sioux Center ethanol plant that has shut down joined the event by phone. He told reporters President Trump “has lost a lot of support” over his administration’s approach to ethanol policy.

“Pretty much everyone I have talked that’s involved in agriculture and the biofuels industry have really lost trust,” Nieuwenhuis said, “and are really frustrated.”

EPA officials, in revealing the details of their ethanol and biodiesel policies for 2020 yesterday, said their action “fulfills the agreement reached on October 4 with the White House, EPA and U.S.D.A.”