You are here: Home / Fires/Accidents/Disasters / Clinton Fire Department given grant to upgrade technology after losing firefighter 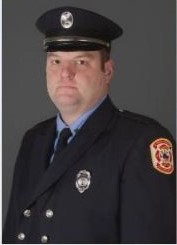 Following the January fire in Clinton that killed one firefighter and critically injured another, the Clinton Fire Department is receiving a grant for a technology upgrade.

The $25,000 grant is one of only two nationwide being awarded by Google Nest and the Leary Firefighters Foundation. Clinton Fire Chief Mike Brown says it’s a true win-win. Chief Brown says, “We’re purchasing equipment to better the fire department, to better the community, without getting into the taxpayers’ billfold.”

The department didn’t seek out the grant but was picked to receive it, after Clinton firefighter Eric Hosette was killed and firefighter Adam Cain was seriously injured in the fire at the ADM plant on January 5th. According to Joel Atkinson, who takes over as Clinton’s fire chief in a few weeks, the funds will be used to upgrade the department’s laptops that are used for pre-planning.

“We go out to businesses and buildings prior to a fire and document their hazards, do diagrams of their buildings, and then if they actually have a fire, we can bring that up on the computers and look at the diagrams and that type of information prior,” Atkinson says.