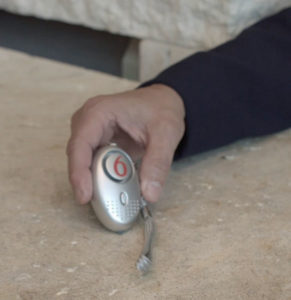 As many as 15,000 Iowans who work in some 350 hotels and motels statewide are being issued employee safety devices, or ESDs, as part of a program designed to help keep them safe while on the job.

Chip Rogers, president and CEO of the American Hotel and Lodging Association, says his organization is supplying guides to the handheld ESDs so each hotel can buy the type of device that’s the best fit for that property.

“A very small resort hotel, let’s say a beachside resort where there’s only ten or 12 rooms, that employee may only need a safety device that makes a very loud sound because everybody’s very close and they can hear it,” Rogers says. “If you’re in a large convention center hotel, when an employee may be as far as a quarter mile away, they may need a device that includes GPS tracking.”

The goal of the Five Star Promise effort is to help prevent sexual assault and harassment of lodging industry employees. It follows recent efforts to ensure all hotel workers are trained to spot and report signs of human trafficking. As for the ESDs, Rogers says not every hotel employee would be issued one.

“If you’re working simply as a person in the accounting department and you’re not having any interactions with guests, you may not need a safety device. You’ll still get the training and you’ll still be subject to the policies, but you may not need the device,” Rogers says. “Those who are working with guests, working in the rooms, those particular employees are most likely to have the devices.”

There are 735 hotels in Iowa with about 38,000 employees. Rogers says almost half have already issued the devices. Even before the campaign was launched, Rogers says the number of reports of lodging industry employees being assaulted was very low and the number has fallen since the program began.

The association targets a broad nationwide implementation of ESDs by 2020. Rogers says 56 companies with 20,000 hotels and 1.2 million employees nationwide are already committed.