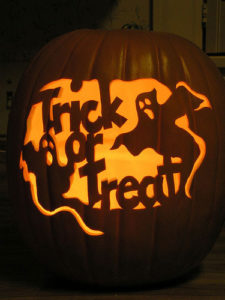 Iowans will soon be preparing their little ghosts and goblins for trick-or-treating and a registered nurse who’s the spokeswoman for the Iowa Poison Control Center has a few advance tips for avoiding trouble.

Poison information specialist Tammy Noble says those colorful glowsticks can be helpful with visibility but it’s not recommended that they be left within reach of tiny hands.

“The problem with glowsticks is, sometimes kids will put them in their mouth and they’ll bite into it,” Noble says. “That liquid that’s in the glowstick itself gets in the mouth and causes a burning, stinging sensation and usually the kids will start crying right away.”

She says calls about glowsticks were the number-one subject in October of last year to the Sioux City-based poison center. Another potential Halloween hazard is the use of dry ice in punchbowls at parties. It creates a spooky fog but Noble says dry ice can also create a risk.

“Basically what that is is solid carbon dioxide and it’s very, very cold,” Noble says. “It’s actually 109-degrees below zero. If you’re using dry ice, definitely make sure you’re wearing gloves when you’re handling it. Otherwise, touching it to bare skin can cause frostbite injuries.”

Never place dry ice in a person’s glass as it could seriously hurt their mouth as they tip back the drink. Noble also suggests using dry ice only in a well-ventilated area. Window clings can pose a choking hazard, should wee ones get a hold of them and try to eat them.

Noble also urges caution if you’ll be painting on a scary face. “Halloween makeups can be irritating to the skin if they’re left on for long periods of time,” Noble says. “It’s a good idea to test that on the child’s skin. Maybe not on the face but in an inconspicuous area like on the arm just to be sure they’re not going to react to it.”

Another hazard is the silver, button-sized batteries found in light-up costumes, toys and decorations. Those batteries can cause serious internal injuries if swallowed. The Iowa Poison Control Center is open around the clock at 800-222-1222.