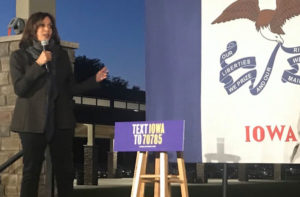 California Senator Kamala Harris hit reboot on her presidential campaign this fall and she’s spending more time in Iowa, trying to convince undecided Democrats to back her in the Caucuses.

Polling data in Iowa shows the vast majority of likely caucus-goers have not settled on a candidate yet. Harris suggests that’s because there are so many candidates in the race — and she sees an opening since she’s competing against well-known candidates like Joe Biden and Bernie Sanders.

“People are still interested in getting to know everyone before they make a decision,” Harris said last weekend, “and that’s why I have virtually moved to Iowa.”

Harris, in her Iowa campaign appearances, has begun addressing those who worry she cannot beat Trump.

“I’m all about straight talk and real talk at this point in the campaign. Let’s be honest. That night in November of 2016 was brutal,” Harris said in Iowa last weekend, “…so I know that’s the context in which we exist.” 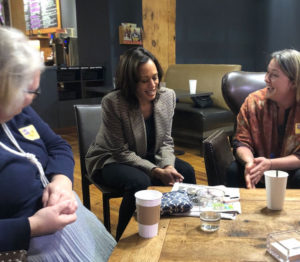 As a rebuttal to those who question her candidacy, Harris cites Barack Obama’s 2008 Iowa Caucus victory, as well as her own record in California.

“I’ve heard this conversation in every single election I have — now here’s the operative word — won,” Harris said, to cheers at a recent event in Des Moines.

Harris, a former prosecutor who served six years as California’s attorney general, is framing many issues around the theme of fighting injustice.

During recent campaign speeches, Harris has not specifically mentioned the Medicare for All policy that has become a dividing line among the Democratic candidates. Instead, Harris emphasizes her support of a $15 minimum wage and her work as a prosecutor. On Thursday, she proposed a federal credit for businesses that hire full-time workers in economically-challenged rural areas.

During a recent event in Ames, Harris spent time discussing her record as San Francisco’s District Attorney — to address critics of her background as a prosecutor.

“I created one of the first-in-the-nation initiatives that was about addressing young men who had been arrested for drugs and, instead of incarcerating them, giving them jobs and support and (putting them) back-on-track to do all that they are capable of doing,” Harris said.

Harris has been doing town hall-style meetings, along with smaller events. She’s starting this Friday with a house party in Clinton.

“It’s basically about doing what I think is an important part of the process,” Harris told reporters earlier this month, “which is engaging with people on the ground, in their neighborhoods, in their homes, to talk about the issues that concern them and address them.”

Harris said recently during a news conference in Ames that her goal is to be “relevant” as Iowa Caucus-goers begin to make their voting decisions. Harris has spent more time campaigning in Iowa this October than any other candidate, as today  marks day eight this month for Harris in Iowa.