You are here: Home / Agriculture / It may not be Iowa chestnuts roasting over the open fire this year 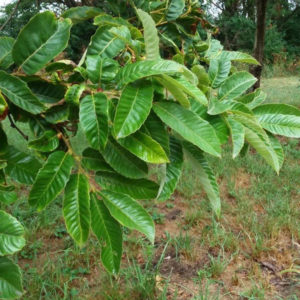 It may be harvest season, but Iowa’s chestnut trees don’t have much to offer as a year of wet weather decimated the crop.

Tom Wahl  of Red Fern Farm in Louisa County has about a thousand chestnut trees which usually produce a lucrative crop on his diverse farm. This year, his chestnut trees produced nothing and a few of his trees, in the wettest soil, died. Wahl is confident things will average out next year.

Wahl says, “Typically what chestnuts do when a weather event prevents them from producing a crop one year, they produce a double-crop the following year.” That won’t quite make his business whole, but it will go a long way. Statewide, the Iowa State University Extension estimates a chestnut harvest of less than one-third normal.

Weather events over the past 12 months caused havoc on many of Iowa’s tree crops. Heavy fall rains, an abrupt November freeze, another hard frost after an early thaw and then spring flooding threatened apple, peach and chestnut trees over and over again. Wahl grows dozens of different fruit and nut trees.

“We have no chestnut harvest this year,” Wahl says. “We had one, out of approximately 1,000 bearing trees, we had one single tree that had what looked like more-or-less a normal crop on it.” Wahl says another 15 trees had a few nuts, but most had none. A small number of peach trees in the state also lost almost everything, according to the ISU Extension, though many varieties of apples did okay.