You are here: Home / Human Interest / ‘Ghosts of the Quad Cities’ chronicles haunted places in the area 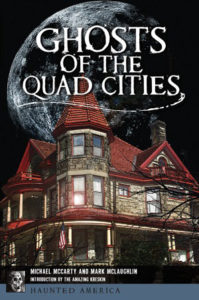 Just in time for Halloween, two Davenport-area men are publishing a nonfiction book about the supernatural called “Ghosts of the Quad Cities.”

Michael McCarty says it all started when he and coauthor Mark McLaughlin visited the Pi Kappa Chi fraternity house near Palmer College in Davenport while organizing a seance for a local appearance by the Amazing Kreskin. “It was pretty creepy,” McLaughlin says, laughing. “The reason we had that place was, we did a lot of research at that time about different ‘haunted’ places in the Quad Cities and that was the number-one hot spot.”

From there, they got the idea to contact The History Press since it’s published a series of books called “Haunted America.” McCarty says they didn’t want to imitate those TV shows where the hosts either want to disprove any possibility of a supernatural presence, or they believe it all, totally. Both men have worked as journalists and took the task seriously.

“We took it as an investigation like a news story,” McCarty says. “We went there and almost presented it like we were presenting a case before a judge and jury. We took the evidence and we’ll let the readers decide if they think it’s a ghost or not a ghost. We present it in a very fair fashion.” McLaughlin says he enjoyed learning about local history, especially when it involved a mystery and something that could not be explained rationally.

“We might’ve come across things that suggested a mischievous presence but we never came across anything that suggested a horrific or malignant or evil presence,” McLaughlin says, laughing. “Nobody got snatched up into the sky or torn up — and nobody was vomiting pea soup around.”

That’s a reference to the classic 1973 horror movie, “The Exorcist.” McCarty says he vividly remembers his visit to the shadowy basement of The Source Book Store in downtown Davenport.  “There was this big furnace in the corner and I was looking at it when it just kicked in, like that, and then it stopped and it freaked me out,” McCarty says. “Logically, it didn’t make a lot of sense because it was during the middle of summer. I thought, ‘Oh, the owner is just trying to scare me,’ so I went back up and they asked, ‘Did you see anything?’ I said, ‘Yeah, the furnace kicked in,’ and he said, ‘That furnace has been disconnected for years.'”

Other sites they investigated ranged from hotels and college buildings to a hospital and the Rock Island Arsenal. McLaughlin says the belief in an afterlife is a manifestation of humanity’s optimism. “As far as we all know, at some point we’ll all end up deceased,” he says, chuckling. “It would be rather sad if every one of us, when we sadly become deceased just flicked out like a candle. It would be nice to think there is something beyond just dying to make a person think, ‘Ah, there is a reward for living my life in a good way.”

The book, “Ghosts of the Quad Cities,” is available through The History Press, a division of Arcadia Publishing, based in Mount Pleasant, South Carolina.