You are here: Home / News / Klobuchar wraps up Iowa leg of ‘For All of America’ bus tour 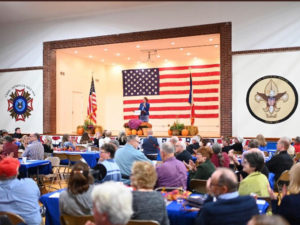 Minnesota Senator and Democratic presidential candidate Amy Klobuchar toured a dozen Iowa counties over the past weekend that voted for Barack Obama, then voted for Donald Trump.

Klobuchar was also one of half a dozen candidates who spoke at the Linn County Democrats’ Hall of Fame dinner Sunday evening. She told the crowd the party can win converts if it presents the right message.

“We’re going to tell them about the broken promises and the insulin crisis and the pharmaceuticals and what’s happening in this country,” Klobuchar said. “But we’re also going to appeal to something else because we have a president where when kids watch him on TV at night, their parents turn off the volume, because they don’t want them to hear what he says.” 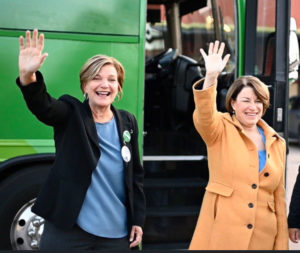 Klobuchar got more than a million dollars in campaign donations in the 36 hours after last Tuesday’s candidate debate. This past weekend, Klobuchar picked up endorsements from state Senator and former television journalist Liz Mathis of Cedar Rapids and from Andy McKean of Anamosa, the Iowa House member who left the Republican party earlier this year.

“I think that endorsements matter because people can go talk to their leaders and say: ‘What do you think about her?'” Klobuchar said.

Klobuchar visited the closed biodiesel plant in Crawfordsville on Friday. Klobuchar also briefly stopped by a Vikings-themed bar in Des Moines on Sunday to cheer with other fans of the Minnesota team.