You are here: Home / News / State snowplow drivers train in a variety of ways for upcoming weather 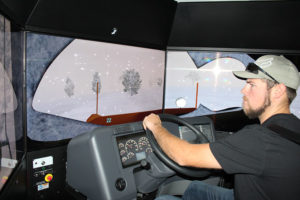 The drivers of the state’s snowplows are in a sort of spring training mode as they prepare for the upcoming winter weather.

DOT winter operations manager, Craig Bargfrede, says just like athletes — plow drivers have to train to be ready when the real event comes. That includes strategy for plowing the new flyover bridge that opened this fall at the edge of Ames.

“The Ames garage will be going out and doing some training, doing some run through with the state that will be responsible for those routes. Just to familiarize themselves with that route — and to make sure that they understand the appropriate techniques for plowing when it comes to an interchange structure such as that,” Bargfrede explains.

There’s been construction going on all over the state this summer and some other types of new interchanges have also been installed. Bargfrede says they have to scout them out too. “Once that whole area is redone, we’ll be doing training and looking at the plowing techniques to ensure that we are doing it in as efficient and safe many was possible for the traveling public,” Bargfrede says.

He says they use several methods to teach drivers — including virtual training. “In a trailer that houses two simulators where they run through various scenarios that show our operators how to handle equipment without actually being out on the highway,” he says.

And then there is the first-hand training in the big orange trucks. “We actually go out and we do some preliminary runs to make sure we are aware of any obstacles, we’re aware of the route, and to make sure the operators are totally familiarized with the route they will be operating on,” according to Bargfrede.

The state has an arsenal of 902 trucks, 42 motor graders, 27 tow plows, and 11 heavy-duty, self-propelled snowblowers to attack the winter weather on the state roadways.