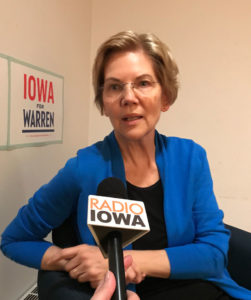 Part of her plan would erase school lunch debt and provide free lunches to every student.

“The basic idea behind it is kids who are hungry don’t learn well,” Warren told Radio Iowa, “and that isolating kids who are poor and saying: ‘You get the crummy lunch and you stand separate from all the other kids,’ has a real cost to it.”

Warren released a five-point plan for public education today during her campaign swing through Iowa. Before events in Cedar Falls and Waterloo Tuesday afternoon, Warren will be making a quick morning trip to meet with striking teachers in Chicago.

“I want to be a president who talks about the importance of backing up working people in this country,” Warren said during an interview with Radio Iowa, “and backing up those who are in public service, who are there to make sure that our kids get a first-rate education.”

At campaign appearances, Warren often tells audiences of her childhood dream of becoming a teacher and her brief time as a special education teacher in New Jersey school. Warren supports federal laws that would strengthen the collective bargaining rights of public school teachers.

“They are in there to talk about what kind of resources these children need, about what it means to be teaching with old textbooks or classes that have 40 kids in them or ceiling tiles that are falling down or roofs that are leaking,” Warren said.

Warren also is proposing increasing federal spending on schools with a high percentage of low-income and minority students and forbidding federal tax dollars from going to private charter schools.