You are here: Home / News / Governors of Iowa, Nebraska and South Dakota meet 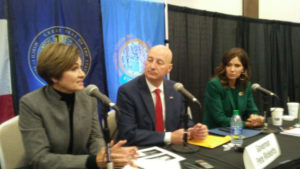 The three governors discussed a variety of topics with local business and government leaders. Reynolds says the tri-state area continues to grow — but there are few obstacles.
“We have an area where the economy is growing despite significant challenges. We still see a lot of opportunities for significant growth. Probably the biggest barriers we are seeing are workforce, housing and then connectivity plays a big role in that as well,” Reynolds says.

Iowa and Nebraska lead the nation in ethanol production and all three states have agricultural-based economies. Reynolds says she believes President Donald Trump supports the rules on requiring a set amount of ethanol to be blended with gasoline.
“I mean he’s committed to that,” Reynolds says, “every time I’ve talked to him in the oval office, he’s committed to adhering to the rule, and so we just need EPA to follow through with it.”

Nebraska Governor Pete Ricketts agrees the president supports farmers. “If you look at what President Trump has done for example on trade — opening up Argentina to our pork, Vietnam to our DDG’s, Japan to our ethanol, China to our beef — he has worked hard to open up markets for our farmers and ranchers,” Ricketts said as Reynolds agreed. “If you look at other policy issues like the Waters of the U.S. — which would have been a terrible rule for farmers and ranchers — his EPA rolled that back and came back with a more common sense approach there.”

All three governors, including Kristi Noem of South Dakota are concerned about what next spring may bring after the flooding this year in the tri-state area. She says their water storage in South Dakota is full and they are moving water out as faster than they ever half.  “Going into this winter with the expected precipitation that we are expecting, I believe next spring could be even worse than this spring was,” Noem says.