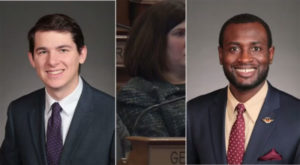 State representatives Joe Mitchell, a Republican from Mt. Pleasant and Democrat Ras Smith of Waterloo, plan to introduce a bill in the legislative in January that would allow college athletes to be paid. California’s governor has signed the first bill to do this, which would take effect in 2023.

Former Iowa Hawkeye wide receiver Marvin McNutt, told KCRG TV-9 he supports this type of bill. “The NCAA makes a whole lot of money off of college athletes, and at this point in the day and age, they’ve got to turn some things around,” McNutt says. That could change for future Hawkeyes and for college athletes around the state.

Representatives Mitchell told KCRG TV-9 the bill is still in the early stages. “This is saying that if somebody’s going to use your name and your face and what you do on the field as advertising or promoting a brand, that you can get paid for that,” Mitchell says. The NCAA which governs most college athletics, has said it is against such a measure, arguing that players receive other benefits like scholarships.

Mitchell says it’s a free market issue. “Specific individuals that bring a ton of value to the school and a lot of revenue to the school, they should be able to make money off their own names,” Mitchell says. “And it’s regardless of whether you’re in football or tennis or golf. They all have the same ability to do that.”

Mitchell and Smith will look to add more cosponsors to the bill before it moves to the subcommittee stage, but Mitchell hopes to at least get the conversation started. Until then, he believes Iowa schools will be at a disadvantage if more states pass similar laws.

McNutt thinks schools could even go a step further and set up a pension-type system for former players. The Hawkeyes’ all-time leader in career receiving yards and receiving touchdowns, says he wishes a law like this one was in place when he was at Iowa, believing he would’ve been one of the players to benefit from it.

McNutt says athletes love school, but need to be compensated for what they do on the field. “When they look at how much work these athletes are putting in on a weekly basis, they’ll be like, O.K., there’s some things we need to change,” McNutt says. The Iowa Board of Regents communications director said the board doesn’t have any comment on this proposal right now and is waiting until the bill is filed to see what exactly the proposal says.