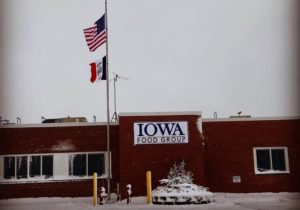 A new owner plans to reopen a meat processing facility in northwest Iowa. Oklahoma-based Lopez Foods, a family-owned business, bought the plant in Cherokee from Iowa Food Group, which closed the facility in April.

Lopez Foods expects to reopen the plant in early spring. The plant was idle for four years before Iowa Food Group started it up again in January. The plant dates back to 1965 when Wilson Foods opened it to slaughter beef and pork. Tyson Foods acquired it in 2001 and produced deli meats at the facility.

“iIt had a long history of employing families throughout our communities and other communities, quite frankly, outside of Cherokee County,” Anderson says.

About 400 people were working at the plant when Tyson closed it in 2014. Lopez Foods, the plant’s new owner, is a key supplier for restaurants and retailers, including McDonald’s and Walmart. The company’s plant in Oklahoma City produces frozen ground beef patties, partially cooked and fully-cooked sausage patties and sliced Canadian-style bacon.