You are here: Home / News / Reynolds says Trump’s trying to please both oil and ethanol industries 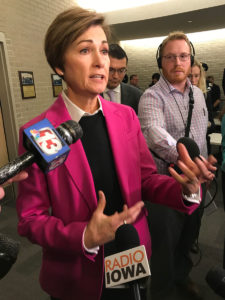 Bloomberg is reporting the U.S.D.A. warned that the EPA’s draft proposal for how much ethanol and biodiesel is to be blended into fuel next year did not fulfill President Donald Trump’s deal with the biofuels industry, but the White House signed off on the plan anyway.

Governor Kim Reynolds told reporters today that she’ll lobby the EPA to change rather than ask Trump to intervene. “I’m going to have to take him at his word. He told us that, you know, we had a deal and so ultimately, that’s part of his cabinet, but we’re also going to continue to put the pressure on EPA because right now they’re the ones doing the rule-making,” Reynolds said. “We’re working with industry and that’s the way that we’ll be able to hold them accountable.”

On Monday, President Trump mentioned the biofuels deal during a cabinet meeting, saying “it is going to be terrific for small (oil) refiners.” Reynolds told reporters Trump is trying to please both the oil industry and farmers.

“The president is trying to walk a fine line between the small refinery waivers and his commitment to Iowa farmers and to a robust Renewable Fuels Standard,” Reynolds said. “…He made a commitment to both.”

Reynolds, though, said the EPA’s draft does not meet the terms of the deal Trump made to ensure the oil industry blends 15 billion gallons of ethanol and biodiesel into motor fuel to make up for the waivers granted over the past two years.

“To be quite honest, we just can never let up the gas on this. We’re going to have to continue to fight for a robust Renewable Fuels Standard,” Reynolds said. “We’re up against ‘big oil.’ That’s never been easy.”

Trump, in public comments this week, has not indicated he plans to intervene. Trump said Monday that the Renewable Fuels dispute was finished and he was ready to sign off on it.

AUDIO of Reynolds’ remarks about RFS to reporters