You are here: Home / News / Warren emphasizes movement building as she takes lead 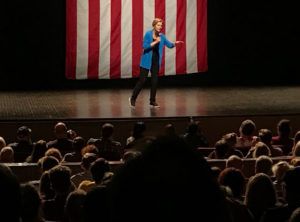 The Democratic presidential candidate who’s topped recent polls in Iowa has just wrapped up a four-day campaign swing through the state.

Elizabeth Warren’s campaign said 1200 people were in attendance at her event in Ames on Tuesday evening. Julia Stevens, a recent graduate who’s landed a job in West Des Moines, was moved by a childhood story Warren weaves into most every appearance.

“When she talked about her mom putting on her dress and going to work at a minimum wage job, that really stuck with me,” she said. “I remember my mom getting ready for work every day, putting on her heels and her lipstick and going out and working hard for us, so really struck a chord there.”

Sophomore Lydia Greene, co-president of College Democrats at Iowa State, said she was struck by how Warren talked about her financial and personal struggles.

“I was, like, fascinated that she was a real human, which, you know, is another reason why I’ll vote for her,” Greene said, “because she’s a real human, just like me.”

Warren earned big cheers for public school teachers, for saying she believes in science and for the litany of promises she says will bring “big, structural change.”

During an interview with Radio Iowa this week, Warren cited her campaign’s early start in answering a question about her steady rise to lead the presidential race in Iowa.

But Warren, who hasn’t spent as much time in Iowa as some of the other candidates, has also relied on dozens of paid staff and campaign volunteers who’ve talked face-to-face with Iowa Caucus-goers.

“People right here in Iowa, folks who could help build a movement, person-to-person,” Warren said. “…I think day-by-day, a lot of folks around the state have said: ‘Yeah, I want to be part of that.’ I think that’s how we’re going to change the world come 2020.”

Warren closed out her Iowa trip with a forum on the University of Northern Iowa campus last night.