You are here: Home / News / Axne and Ernst deliver flood speeches about USMCA 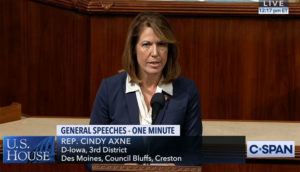 Iowa Congresswoman Cindy Axne is urging her Democratic colleagues to strike a deal with the Trump Administration on the USMCA soon.

“Whether it’s touring manufacturers, visiting with farmers or stopping into small businesses, everywhere I go the message is loud and clear: ‘Uncertainty is hurting our bottom line,'” Axne said yesterday.

Mexico ratified the USMCA this summer. President Trump’s trade adviser has been meeting with a group of House Democrats who are pressing for assurances that Mexico will abide by labor rules in the agreement. Axne, a first-term congresswoman who is not part of that negotiating group, said ratifying the agreement is a way to support beleaguered farmers.

“Supporting farmers is neither a partisan or a political issue. It’s simply the right thing to do,” Axne said. “Between devastating weather events, ongoing trade wars and the EPA’s unprecedented abuse of biofuels waivers, our farmers have been put through enough.”

Axne made her comments during a speech on the U.S. House floor yesterday. On the other side of the U.S. capitol, Republican Senator Joni Ernst gave a floor speech on the topic yesterday as well.

“Iowans want the USMCA now,” Ernst said. “…There is no reason Iowans should be waiting in limbo for this agreement to be ratified.”

The Trump Administration has not sent congress the paperwork yet to turn the trade agreement into law, waiting to strike a deal with Democrats in the House. Ernst said House Democrats are distracted by other topics.

“Like continue on their partisan expedition towards impeaching the president,” Ernst said. “…House Democrats need to do their job so that Iowa farmers, manufacturers and business owners can do theirs.”

Canada and Mexico are Iowa’s top trading partners. Mexico is the number one export market for both corn and pork.