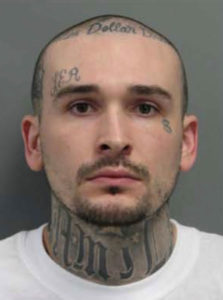 A two-day man-hunt that stretched from Council Bluffs to Omaha ended with an arrest late Wednesday.

According to a news release from Council Bluffs Police, state and federal authorities were searching for 29-year-old Jamie Kennedy of Council Bluffs on Tuesday morning in Council Bluffs. He was wanted on felony and misdemeanor domestic violence charges.

A Council Bluffs policeman spotted Kennedy sitting in a parked pick-up. Police say Kennedy backed around another vehicle, slammed into the officer’s patrol car and eventually escaped by driving over a fence. Authorities chased Kennedy’s vehicle as it drove the wrong way over a Missouri River bridge into Omaha, where he ditched his truck.

Omaha Police tracking Kennedy chased him on Wednesday afternoon, but it wasn’t until Wednesday evening they were able to take Kennedy into custody at an apartment complex in Omaha.