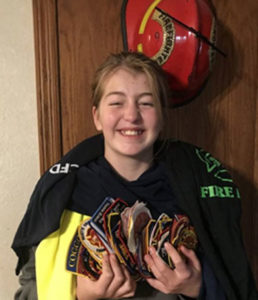 A Delaware County girl’s 4-H project is getting responses from across the state and across the country.

Twelve-year old Kendra Lux is collecting t-shirts and patches from fire departments for a quilt she was inspired to make by her dad Dustin, who serves on the Ryan Fire Department. ” I wanted to honor him and his name and what he does,” Lux says.

Word has been spreading quickly through Facebook and she’s already received more than  60 patches and more than 25 t-shirts fire Iowa departments in Coggon, Delaware and Marion.

And she’s gotten responses from as far away as Salt Lake City and Australia. “I’m overwhelmed with it and I think it’s just awesome that so many people want to help me with this 4-H project,” Lux says.

Kendra says she looks forward to checking the mail every day. She says she is like a kid on Christmas going to the mailbox to see what has come in.  Lux says she’s never made a quilt before, but with her mom’s help, she plans to learn how.

She is a member of the a member of the Buffalo Belles and Boys 4-H Club in Ryan and says her  main goal is to create a 4-H project to be judged at next summer’s Delaware County Fair. If she gets extra t-shirts and patches, she might make a second quilt that he dad suggests is auctioned off at the state firefighters convention.

Kendra says she’d like to follow in her dad’s footsteps someday and become a firefighter too.” Because I think it’s very cool what they do and how they save their community and they get so little from it,” according to Lux.

Fire departments are encouraged to send a t-shirt or patch to Kendra at P.O. Box 76 Ryan, Iowa 52330.