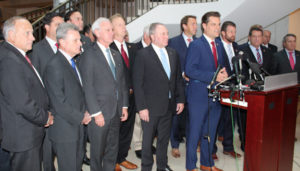 Iowa Congressman Steve King was among the 30 House Republicans who staged a sort of sit-in in a capital meeting room where impeachment hearings are being held.

King said in a written statement that it is “unimaginable” that anyone would hold secret impeachment hearings and he described the process as “the greatest atrocity” he’s seen in his 17 years in congress.

King said he and his GOP colleagues raised a “significant ruckus” and stormed into the secure room. King said he’s standing with President Trump and will continue to push back against secret impeachment hearings.

Democrats say they are abiding by rules established in 2015 by Republicans when they were in the majority.

King was not one of the House Republicans who entered the room with their cell phones, a security breach which prompted a security sweep after the group left.