You are here: Home / News / Corps trying to drain stored water to make room for winter rain and snow runoff 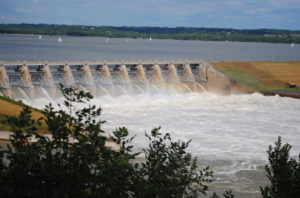 The U.S. Army Corps of Engineers is working to release stored floodwaters in the upper Missouri River Basin to reduce the chances of flooding next spring.

The Corps has about two-and-a-half months to get rid of a little more than 5-million acre-feet of water from flood control reservoirs. The Corps’ John Remus says that’s doable with the amount of water they’re releasing from Gavins Point Dam in South Dakota.

Remus says, “Our runoff forecasts, coupled with our reservoir studies, say that if we maintain the 80,000 cubic feet per second out of Gavins Point Dam and the associated releases out of Fort Peck, Garrison and Oahe, that we will reach that goal of 56.1 million acre-feet of storage by the next year’s runoff season.”

It’s been a wet year for the basin and Remus says if there’s a lot more rain and the Corps can’t evacuate enough storage, that could increase flood risks for everyone from Bismarck, North Dakota to St. Louis. National Weather Service hydrologist Mike Gillispie says there’s still a lot of uncertainty about flooding next spring. Right now, the soil is very wet and smaller lakes and ponds are full. Gillispie says it’s like putting a wet sponge in a freezer.

“You start dumping water on top of that, all of that water is going to run off,” Gillispie says. “So we just don’t have that storage in the soils or in the ponds and lakes and streams and rivers that we’re starting at such a high level, it’s not going to take as much precipitation to start causing problems in the spring.”

He says the odds are slightly higher that the basin will see above-normal amounts of rain and snow through most of winter. The Missouri River Basin above Sioux City is predicted to tie for the highest amount of runoff in a single year in 121 years.