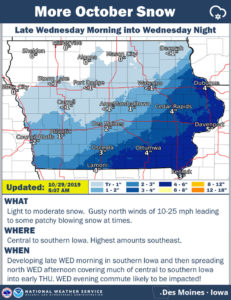 Potential power outages are a concern across eastern Iowa where many trees are still full of leaves and a wet, heavy snow is in the forecast.

All-time snowfall records were set Monday for Des Moines and Waterloo and now a wide section of Iowa is expecting its second snowstorm in three days. Meteorologist John Haase, at the National Weather Service in Davenport, says the timing is disappointing, especially for kids.

“The one for Wednesday night and Halloween looks particularly strong,” Haase says. “This would be tough going for the trick-or-treaters. We’re looking for at least several inches of snow, potentially four to six inches.” Winter doesn’t officially arrive until December 21st, but the landscape in Davenport certainly won’t resemble fall anymore if another six inches of snow comes down.

“Last night, we had one to two inches and the most snow that’s ever fallen in the Quad Cities in October was back in 1967 when we had 6.6 inches for the month,” Haase says. “We’re looking at several inches of snow to go but it sure seems like we have a great opportunity to have the all-time snowiest October.”

As the snow falls, so will temperatures, with lows expected in the 20s.  “If you are a fan of winter, you’re in luck, because it looks like the pattern, at least for the next couple of weeks, it’s really cold and we’re pretty much stuck,” Haase says. “I really don’t see the snow melting too much.” The back-to-back snowstorms are catching many eastern Iowans off-guard as they haven’t been able to rake their leaves yet, let alone get the snowblowers or shovels ready for action.

“Last night, we had anywhere from one to three inches and a lot of people were reporting the trees were weighted down by the snow with the leaves still on the trees,” Haase says. “If we get a heavy snow on Halloween, we could potentially have some branches coming down and some power outages.”

Des Moines got 1.2 inches of snow on Monday, breaking a record for October 28th that’s held since 1913. Waterloo reported 1.4 inches, beating a snowfall record for the date set in 2002.