You are here: Home / Fires/Accidents/Disasters / Fire damages I-29 bridge in Sioux City 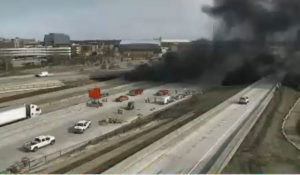 DOT camera view of the fire.

A fire Wednesday in a homeless camp damaged a downtown Interstate 29 bridge in Sioux City.

DOT spokesman, Dakin Schultz, says traffic on the mainline bridge over Perry Creek has been cut to one lane. “The fire occurred toward the outside of the structure or toward the outside shoulder of the structure. So, we have reduced traffic northbound to one lane is running on that bridge — and wev’e got it up against the median barrier,” Schultz says.

Southbound traffic is also one lane and shifted into the new construction area for now. Schultz says the thick black smoke and heat from the fire caused a major traffic jam and damaged the bridge. “We are in the process of having that area cleaned for an inspection. We’ll have a bridge inspection crew come in and do a review on that,” Schultz says. “We would then have that information provided to our structural engineers for a full evaluation to try and determine what type of repairs are required.”

He says they can’t take action until finding out exactly how much damage happened. “We do know there is damage to the bridge. Through the initial inspection it’s obvious we have some of the concrete pulling away from the structure. We just have to determine what ultimately needs to be done to get this bridge back into service,” Schultz says.