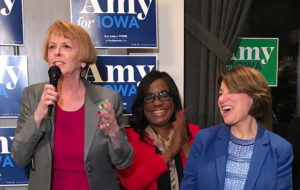 A prominent Des Moines attorney who was the Democratic Party’s first female candidate for governor has endorsed Minnesota Senator Amy Klobuchar’s bid for the White House.

Roxanne Conlin was also the first woman president of the Association of Trial Lawyers of America and one of the first two women in the country to be appointed as a U.S. Attorney. Klobuchar tonight said Roxanne Conlin’s vocal support will be crucial on the Iowa campaign trail if the House passes articles of impeachment and the Senate has to conduct a trial.

“We may be in an impeachment hearing in January, so Roxanne is going to have to be doing a lot of speaking if I am back there in Washington,” Klobuchar told Radio Iowa, “as will my husband and so many other people.”

Klobuchar said the Iowans who’ve endorsed her, including 13 current of former members of the state legislature, will be able to continue talking with their friends and neighbors if she is involved in impeachment proceedings in Washington. Klobuchar is one of six U.S. Senators competing for the Democratic Party’s 2020 presidential nomination.

“My plan is to be in Iowa and some of the other early states as much as I can be every waking hour,” Klobuchar told Radio Iowa during an interview tonight on her campaign bus. “I am someone that has always needed little sleep, so maybe I’ll just show up at midnight and I am someone that can juggle things and that’s what we’re going to have to do here.”

Conlin announced her endorsement to a crowd in a Des Moines bar earlier this evening, then joined Klobuchar on her campaign bus. Conlin said she will dedicate as much time as she can to making the case that Klobuchar is best suited to beat Trump next November.

“She can stand up to whatever the current occupant of the White House sends her way and he will be sorry when he is on the other end of her wit. He is witless,” Conlin said.

Klobuchar laughed and said: “That’s what I like about Roxanne. She’s really subtle, but here’s the deal: you don’t need a lot of subtlety in politics these days; I think you just have to be really honest with people.”

Klobuchar will be the 11th of 14 candidates to speak Friday evening at the Iowa Democratic Party’s annual fall fundraiser in Des Moines.