You are here: Home / Outdoors / State increases bobcat bag limit in some counties as population increases 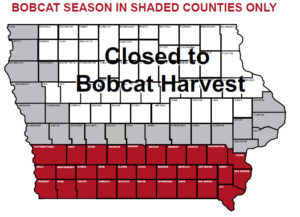 The bobcat limit in the red counties is 3, it’s 1 in the gray counties.

The bobcat comeback in Iowa continues and that’s led the Iowa DNR to raise the trapping limit in the area where they are most prevalent in the state.

DNR wildlife biologist Vince Evelsizer, says they are moving from a one bobcat limit up to three across the southern three tiers of counties in southern Iowa. While the other counties will stay at a one bobcat bag limit.

Forty-six of Iowa’s 99 counties are still closed to any bobcat trapping — stretching from the counties next to the western border across central Iowa to the eastern side of the state.

Evelsizer says some of those close counties are starting to see more animals. “The bobcat population continues to do well — it’s still in expansion mode — so, we are happy to see bobcats still expanding into more areas of Iowa from a south to north direction,” Evelsizer says. “Right now, kind of the front line for that is northeast Iowa. There’s starting to be more bobcats up there.”

The bobcat range has already expanded from southwest Iowa northward along the western border. “Places like Boone County, Webster County they are doing very well up through there, up through the river corridors. And then in western Iowa they now extend all the way up the South Dakota-Minnesota border in western Iowa. We are seeing them fill in in areas of good habitat throughout the state in a south to north direction,” Evelsizer explains.

He says they have taken a conservative approach to the amount of bobcats that can be taken as they’ve made a comeback.
It’s another case of a wildlife success story that they largely did on their own, where they naturally came back to Iowa. They are originally native to Iowa — and they came back over time,” according to Evelsizer. “In this case all we did was protect them from harvest and any other kind of take from the mid 70’s up until 2007 when there was a closed season on them.”

The bobcat comeback has not gone unnoticed among the human residents of the state. There were many unconfirmed reports of bobcat sightings as their population increased — that in some cases were cats or other animals — and some cases were actually bobcats.

Evelsizer says there’s still a lot of talk about them. “It’s really mixed. There’s more folks that have seen bobcats than ever. They tend to show up — especially on trail cameras — and sometimes folks will see them in their backyard walking along the edge and that sort of thing,” Evelsizer says. “In general bobcats are secretive. There’s a few places in some towns where bobcats are getting spotted regularly. But in general bobcats they are a secretive animal that’s mostly nocturnal.”