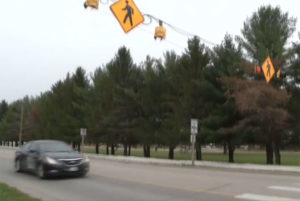 Speed cameras will go up on this busy street near Independence schools. (KCRG TV photo)

The Independence city council has approved a five-year contract to install speed and red light cameras along a quarter-mile stretch of First Street West where there are two elementary schools and two preschools and daycare centers.  The street also leads to the junior-senior high school.

Police reported that a car almost hit a school crossing guard on the street last month. Independence Police Chief Dustin Dallenbach told KCRG TV-9 that he has seen the problem first hand.  “I have kids that go to school, both the middle school and the elementary school, and if we ever decided to want to walk to school someday, I know what it’s like to try to get across First Street,” Dallenbach says, ” it’s a nightmare.”

Dallenbach says the police department has tried just about every tactic it can think of to get drivers to slow down in the school zone, including flashing signs. But, the problem’s still there. “Because of so many cars that are in that area, it’s hard for an officer to turn around to stop a car,” Dallenbach says.

The city approved a the contract with Sensys Gatso –the same company that currently operates traffic cameras in Cedar Rapids and Waterloo. The city will next determine the exact locations of each camera. Chief Dallenbach told KCRG TV-9 there will most likely be one month-long warning period for drivers to get acclimated to the cameras before citations are issued. He expects it to be a fairly quick process between now and then.

“Usually they can get them up and running in two to three months,” according to Dallenbach. The city also plans to install two red-light cameras at intersections where they don’t allow right turns on red.  “Those were put in place for kids to cross the street without having any issues, so having the no-turn-on-red stoplight cameras there would be a benefit,” Dallenbach says.

One parent told KCRG TV-9 that she doesn’t know how much an effect the cameras will have and believes a larger officer presence in the school zone will deter speeders. But most drivers picking up kids at the two elementary schools said they believe the cameras are a good idea — including Kim Gates.

“I think most people are generally careful,” Gates says. “But then you might have one or two that aren’t, and it only takes one time.” Police are also looking into getting a speed camera car, like Cedar Rapids and Waterloo both have, as well as a handheld speed device. The contract with the city says they will pay Gatso 38 dollars per paid citation or 38 percent of total citation fees, whichever is greater.