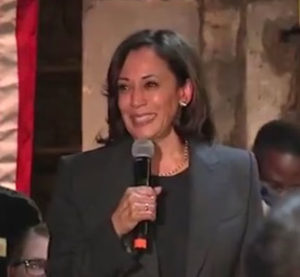 California Senator Kamala Harris enters November after spending nearly half of October campaigning in Iowa — the most of any of the Democratic presidential candidates — and this week she shifted staff from California, Nevada and New Hampshire to Iowa.

“It was a very tough decision that we had to make, but frankly a necessary decision,” Harris said yesterday after confirming she had laid off some staff as well. “I’m ‘all in’ in Iowa and I intend to win.”

Harris will be among the 14 candidates who address a crowd of thousands tonight in Des Moines at the Iowa Democratic Party’s annual fall fundraiser. Thursday afternoon, Harris participated in an hour-long forum hosted by Iowa Public Television and Des Moines Area Community College. She began by talking about the re-calibration of her campaign.

“I’ve been spending a lot of time here,” Harris said. “I will continue to spend the majority of time here, hoping to and working at earning the support of Iowans around a variety of issues.”

Harris described her proposals on student loan debt and health care reform as more modest than some of her rivals.

“Medicare for All is my plan, but my plan is different from some of the other folks on the debate stage,” Harris said. “…I’m not going to raise middle class taxes and, equally important if not more important to many people, I’m not going to take away your option to have a private plan.”

At a forum in Des Moines early this year, Harris had indicated she supported a universal health care plan that would eliminate private insurance, but Harris later said she misunderstood the question. In late July, Harris released details of her own approach to health care reform and how to pay for it. Harris proposes taxes on stock and bond trades as well as a new tax on households with six-figure yearly incomes, but on a sliding scale to account for the cost of living in various parts of the country.