You are here: Home / News / October ends colder and wetter than normal 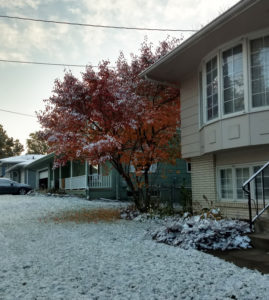 October was colder and wetter than normal.

Trick-or-Treaters had to thaw out their mini candy bars when they got home for the evening Thursday.

State Climatologist Justin Glisan says the cold and snowy spook night summed up the story on October. “It was a cold and wet month across the state,” Glisan says. He says there were very few days where you could go without a jacket for the month.
“If you look at the average temperature — we were bout 46.6 degrees — and that’s almost five degrees below normal. And that’s colder than we would expect in October,” according to Glisan.

The cold temperatures came with plenty of rain and snow. “We were about 4.9 inches — which is 2.32 inches above average — so very wet,” Glisan says. “The wettest areas of the state seemed to be in a southwest to northeast stretch in central Iowa, anywhere from 4 to 5 inches above average in some spots.”

Glisan says the cold pattern is expected to continue through mid-November.