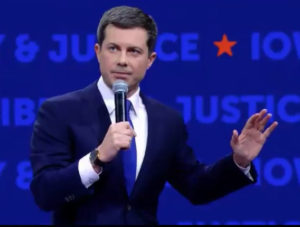 More than 13,000 people were in the venue for the Iowa Democratic Party’s annual fall fundraiser. South Bend, Indiana Mayor Pete Buttigieg drew the slot to give the opening pitch, offering a 2020 argument with a throw back to some of Barack Obama’s 2008 message.

“If talking about hope and belonging sounds optimistic to you for a time like this, fine,” Buttigieg said. “Call it optimistic, but do not call it naive, because I believe these things not based on my age, but based on my experience.”

“And anyone who comes on this stage and tells you to dream small and give up early is not going to lead our party to victory,” Warren said.

During his turn at the center of the arena stage, Biden suggested Warren’s support of “Medicare for All” was a liability and the former vice president closed by emphasizing America’s standing on the world stage.

“The next president is going to be the commander-in-chief of a world in disarray,” Biden said, adding a sentiment that’s been his core message: “There’s going to be no time for on-the-job training.” 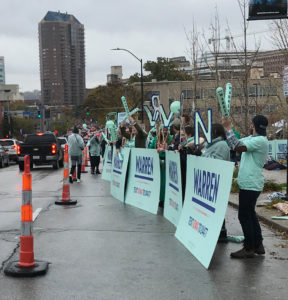 Elizabeth Warren supporters outside the arena.

Vermont Senator Bernie Sanders, the other candidate knotted at the top of recent polls along with Biden, Buttigieg and Warren, opened his remarks by saying he’d donated $20,000 to the Iowa Democratic Party, “to make sure that in this vitally important battleground state we take back Iowa in the General Election and defeat Trump and defeat him badly.”

Sanders rented space across the street for his supporters to watch as he delivered remarks at the party fundraiser.

California Senator Kamala Harris argued winning in 2020 means looking to the future rather than to yesterday.

“We’re going to need a nominee on that stage with…who has the ability to go toe-to-toe with Donald Trump,” Harris said, “and Iowa, you’re looking at her.”

“And when people tell me that a woman can’t beat Donald Trump, I tell them Nancy Pelosi does it every single day,” Klobuchar said.

New Jersey Senator Cory Booker focused on a response to the “moral vandalism” of Trump’s presidency.

“With a president who tries to divide us, the end for Democrats shouldn’t be to beat Republicans,” Booker said. “The calling of this party must be to unite Americans again in common cause and common purpose.”

“The only way we will do anything is if you are to create a wave,” Yang said, “…and bring that wave crashing down on our heads.”

“We’re great at talking about the middle class…but we also need to fight for the poor and those who have the least,” Castro said.

The other Texan who had been scheduled to speak in the arena dropped out of the race late Friday afternoon. Beto O’Rourke told supporters outside there’s wasn’t a path for him to win the presidential nomination.

“I love you all and I know I will be seeing you down the road,” O’Rourke said shortly before the program inside the arena began.

His exit shocked backers who were in Des Moines for the event. Peggy Crowe, a supporter of O’Rourke’s presidential campaign as well as his unsuccessful U.S. Senate bid in 2018, flew in from Asheville, North Carolina.

“I never knew anything about politics and after Trump got elected, I knew I couldn’t be complacent,” she said.

Bruce and Verlane Edwards of West Des Moines are undecided voters who think O’Rourke may be a good running mate for their party’s 2020 nominee. Bruce Edwards has Buttigieg, Klobuchar, Harris on his list for Caucus night.

“Quality people there,” he said before Friday night’s program began. “Biden, we’ve always loved and adored him, but he’s over-the-hill and he really needs to get out and endorse somebody else.”

Verlane Edwards likes Harris, but after Hillary Clinton’s loss, she’s worried the country isn’t ready to elect a woman and she’s worried about Biden’s age, too.

“I’m looking for someone younger. I’m a little tired of the old white guys,” she said. “I love Pete. I think he’s wonderful. I see a big group here for him.”

Fran Mersnick and a friend drove from Pacific Junction to Des Moines to cheer for Buttigieg on Friday night “because Pete is intelligent. He has good plans. I believe in what he’s saying and what he’s going. He’s just an all-around great person and we think that he can win.”

Don Hirt of Eldora, who sat in Warren’s cheering section, said all the candidates are good, but Warren is “a tiny bit better.”

Hollie Gray, Jr. of West Des Moines is another undecided voter who’s worried about nominating a candidate who’s an advocate for free college and Medicare for All.

“I say this and I don’t mean it to be rude, but nothing in life is free,” Gray said. “It has to be paid for somehow, some way.”

Mandy Lundberg of Indianalo, a Republican-turned-Democrat who describes herself as “anti-Trump”, heard Harris speak in Ankeny Thursday, immediately became a supporter.

“I felt like I wanted to hashtag #lawyeredup or something because she was very matter of fact, like: ‘This is the argument…Can we just agree to work together on this?'” said Lundberg, who was among those in the Harris cheering section Friday night.

Geena Schmidt of West Des Moines sat in the Yang section. She became a Yang supporter after a friend connected her to the campaign through social media.

Yang and most of the other candidates who spoke Friday night in Des Moines are campaigning around the state this weekend.