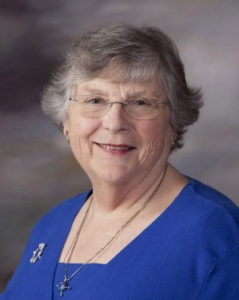 Today marks 40 years since Iranian militants took over the U.S. Embassy in Tehran, taking 52 Americans hostage, including an Iowan.

For 444 days, the embassy employees were held in the compound as the former Shah of Iran was in New York for cancer treatment. Former hostage Kathryn Koob now lives in Waterloo and keeps in contact with some of her former embassy co-workers.

Koob says, “We’ve had at least one reunion that I was able to be a part of and most recently, I saw two of the young Marines at Bruce Laingen’s memorial service in Eden, Minnesota.” Koob shared quarters with another female hostage during the long ordeal. The male embassy employees were scattered around the compound. The hostages were released in January of 1981 as President Reagan took office.

Koob is hopeful that someday the U.S. and Iran will resume friendly relations. “I hope so,” she says. “I think it’s important for us to have diplomatic relations with all countries. Diplomatic relations simply means that we have a channel and a way of working with each other. It does not necessarily mean that we are in agreement.”

Koob, who was a 1960 Wartburg College graduate, was in Iran as director of the Iran-America Society. It was set up by the U.S. government to create community and educational ties between the two nations. America was a close ally to the former Iranian government until Ayatollah Khomeini took power in February of 1979. Koob says she’s optimistic peace will return.

“I thought we had taken a good first step when we were working with the world community to get the agreement that President Obama and so many other world leaders worked so hard to get a couple of years ago.” The Trump administration pulled the U.S. out of that accord, which Koob views as a step backward.

“I’m no longer a part of Washington,” she says. “I’m not sure why all of the decisions are being made. I think the decision to step away from that agreement, from my personal point of view, was not a good choice.”

Koob had arrived in Tehran only four months before to the siege that led to her being captured. She’ll be in Chicago this week to give a presentation on her experiences as a hostage after the program today in Washington D.C. on the 40th anniversary of the embassy takeover.