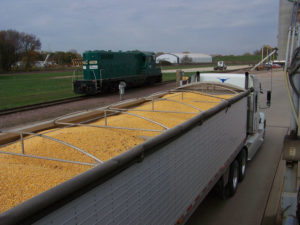 The governor has signed a proclamation temporarily suspending certain regulation on the hours of service for the delivery of propane.

Early winter weather conditions the late harvest are all creating a big demand for the liquid gas. The president of Demmer Oil Company in the Worthington, Steve Demmer, says supplying his northeast Iowa customers with liquid propane (LP) has not been easy.

“We have gotten 25 percent of what we actually need. We are working very hard — we are getting propane out of Chicago and Kansas — but those are long deliveries,” Demmer says. “So this is going to be something to try and get through this year.” It is not uncommon for fall demand to slow the deliveries — but he says this year is tougher.

“This is the worst we’ve ever seen it. We’ve gotten through every other year and we’ve always gotten propane — 2008 and 2013 were our worst years and we’ve always kept people in propane,” Demmer says, “but this year it certainly is not going to be the case.”

State Senator Dan Zumbach of Monticello, is also a farmer and says the propane supply is there – it’s just hard to keep up with the demand. “Yeah it’s discouraging for a lot of folks and you have to keep it in perspective and keep your head on straight. You know it is not our suppliers problem. It is not anyone’s real fault,” Zumbach says. “But what is going on and what created the situation is — we have a huge supply of LP — but we are using the LP so fast with today’s modern combines, with today’s modern driers and with the late crop, everyone in the midwest want’s LP and everyone is consuming it.”

Wet grain has to be dried or it can spoil in the storage bins and become useless. “It’s a very real problem and it’s going to slow harvest down tremendously, because you have to dry the crop as you’re harvesting and it may very cut that rate by half. And that is concerning for a lot of farmers,” Zumbach says. ” I am sweating it out myself — but am willing to take my turn so that suppliers can spread that out the best they can.”

Zumbach says there’s not much more that can be done to speed up the process.
“People just have to be patient and realize it’s not your driver’s fault. It’s not your suppliers fault — it’s just a huge demand. The state of Iowa did everything they can to allow drivers to deliver as quickly and as long hours as is safe,” Zumbach says. The harvest has been running way behind normal and wet weather has also kept crops from drying in the fields.