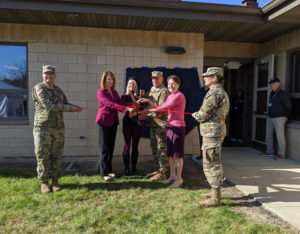 Cutting the ribbon at the Camp Dodge USO Center.

The first USO Center in Iowa opened this past weekend at Camp Dodge in Johnston.

The USO was created 78 years ago during World War Two to bring entertainment and shows to the troops serving overseas.
“The USO had a very unique mission of connecting them to home — of letting them know that the folks back home were supportive of them,” Ruble says. She says the methods have evolved through the years — but being supportive is still the main goal. That includes the soldiers and their families.

“The USO develops a lot of wonderful programs that are partnerships with the community. And we deliver youth and family programs that are special interest. For example — special days at a museum that have a learning component. We administer connections to free tickets to go see sporting events or theatrical events,” Ruble explains.

She says while soldiers now have cellphones, it is not always convenient to use them in the field. And she says they don’t always have time to get some everyday things done. “A lot of service members, whether they are transitioning out of the military — or in the case of our National Guard who are constantly drilling and living in the community — they’re in constant transition as all of our service members are. USO has developed a new program called ‘USO Pathfinder’, which is a free concierge-like program,” according to Ruble. She says it helps them handle some of the day-to-day things that come up.

She says they also help coordinate volunteers that help with the USO programs. “Around the world we have 30,000 USO volunteers. They give about 1.6 milion volunteer hours a year if you can imagine. This is from all of our locations. And to get involved, you go to our website USO.org and click on ‘how to get involved’ and you can find a local USO,” Ruble says. The address to find out more about the Camp Dodge USO center is Iowa.USO.org.