You are here: Home / News / New programs allows you to get a UNI degree at DMACC in Des Moines 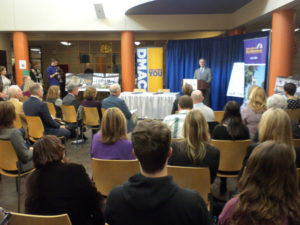 Des Moines Area Community College (DMACC) and the University of Northern Iowa announced a program today that allows students to get a UNI degree in Des Moines.

DMACC president Rob Denson made the announcement at the school’s Des Moines campus. “Pending Board of Regents approval and DMACC board approval — which is scheduled to happen next week — we will start a two-plus-two education program on this site beginning next fall,” Denson says. “Where DMACC graduate will be able to enroll and pursue a new bachelors degree in liberal sciences.”

DMACC has several campuses and there are some five-thousand students enrolled the Des Moines campus which is on the edge of downtown Des Moines.  “Called ‘UNI at DMACC’ this program will offer new affordable and flexible options for our students to earn a bachelors degree close to their family, close to their jobs and close to home,” Denson says.

Demson says the Des Moines campus is first public majority-minority college campus in Iowa — with a 52% population of students of color. The average age of its student body is 28.  “This is particularly helpful to those students who may be place bound, job bound, family bound, to be in the Des Moines area, so they will be able to access a UNI degree,” he says.

UNI president Mark Nook says the agreement builds on other collaborations they have had with DMAA, including the teacher education program. He says DMACC’s student body fits in well with those on campus in Cedar Falls. “Ninety-percent of the people that come to us come from the state of Iowa. Eighty-five-percent of our grads return to the state of Iowa,” according to Nook. “We are always looking for what can we do to better serve the needs of the state of Iowa, the people of Iowa. What kind of education needs are there?” 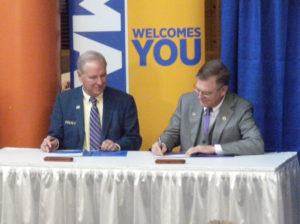 Nook says they will have staff at the DMACC campus to work with students and let them know about the program. DMACC is in the process of building a new 65,000-square foot student services building and Nook says UNI will raise $2.5 million toward that effort.

Students will complete their first two years at DMACC and then become UNI students for the final two years. Nook says it works out to the same cost as beginning at DMACC and then transferring to UNI. “There really isn’t a cost difference at all. In some ways starting here and staying here is a cost savings because they won’t have to relocate — but the educational costs aren’t any different,” Nook says.

Northern Iowa has struggled to keep its enrollment up in recent years. Nook says they will have to see if this program helps that — but says it’s not the biggest concern. “You know we’re not doing this as an enrollment issue — we are doing this because it is the right thing to do — especially for these in the greater Des Moines area. Especially the urban core of Des Moines,” he says. “There’s a group of students here who are place bound. That have no way to get to UNI to get a degree to get up the road to Iowa State. If we don’t do this — there really isn’t a great option for them.”

The two presidents say the potential exists to expand to additional offerings between the two schools.