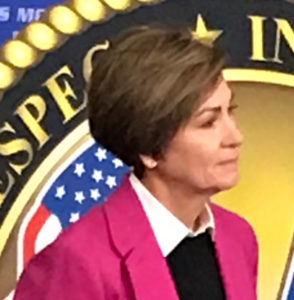 Governor Kim Reynolds will meet early this  morning with a small group of business owners — the beginning of an effort to boost the job prospects for inmates being released from prison.

“This is a real opportunity for businesses to take a second look…at a group that they’ve maybe not considered before,” Reynolds told reporters Tuesday.

Reynolds said Iowa’s business community may not be aware of the education and training programs underway inside the state’s prison system.

“They have to be on good behavior to be able to participate, so these individuals have made a decision that they want to turn their life around,” Reynolds said. “They want to have a skill. They want to be successful. They want to get back to their family.”

For example, some inmates at the prison in Newton are learning construction skills and building homes that can be trucked off of prison grounds and placed in communities with a lack of housing. Today’s meeting in Mitchellville, at the state prison for women, is the first of several being planned at other prison facilities around the state.

“We’re hoping to put together a website of employers that are willing to hire individuals with a record,” Reynolds said.

Since Reynolds was elected to a full term as governor a year ago, she has focused on what she calls a “second chance” agenda. Reynolds just last week appointed a task force to come up with more criminal justice reform proposals.