You are here: Home / Sports / UNI opens with win over Old Dominion 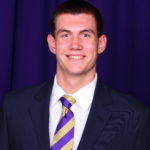 The Northern Iowa men’s basketball team opened the season against Old Dominion in the McLeod Center, defeating the Monarchs 58-53.

The Panthers led the game for all but 32 second on Tuesday night. Strong defense highlighted the game, with just a 26-25 halftime lead the Panthers had made 11 of 32 field goals but were held to just two three pointers on 17 total attempts. The Panther defense forced eight Old Dominion turnovers with freshman Antwan Kimmons recording the lone Panther steal in first half.

The offense picked up midway through the second half when Spencer Haldeman hitting back to back three pointers to give the Panthers a 39-30 lead with 13:34 remaining in the game. Austin Phyfe added two free throws five minutes later to give the Panthers an 11 point lead at 48-37, their largest lead of the game.

Spencer Haldeman hauled in six defensive rebounds while adding a team high three three pointers on the night. Tywhon Pickford led the Panthers with two steals on the night while Isaiah Brown added six point and six rebounds in just under 30 minutes of playing time.