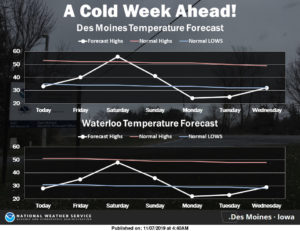 While it was unseasonably cold across Iowa this morning, forecasters warn it’ll get much colder next week which will likely freeze soil moisture in place and raise the chances of spring flooding.

“You’ve got wet soils, you’ve got high reservoirs, it’s going to take a while to drain,” Kluck says, “Even the rivers will take a very long time to drain out and probably won’t until next spring, and that’s only if we don’t get average or above-normal precipitation during those times.”

The winter outlook calls for above-normal snowfall for most of the Northern Plains, though Kluck says there are no big indicators right now.

“Something we lean on a lot in the climate world in terms of outlooks is El Nino and La Nina and we don’t have a strong one or the other pushing our forecast one way or the other,” Kluck says. “Those outlooks, although based on the best science that we have, have a relatively low confidence level attached to them.”

As for the winter ahead, Kluck says a quiet weather pattern would be the best-case scenario. “What we really need to happen is to have a relatively dry and a relatively warm winter season so we can get rid of some of the water that’s already existing across the entire Missouri and upper Midwest,” he says.

Kluck notes snowpack is already accumulating in the Rocky Mountain region which will melt next spring and feed into the Missouri River basin, which has flooded repeatedly this year.