You are here: Home / News / Grassley at White House to celebrate Trump’s impact on courts 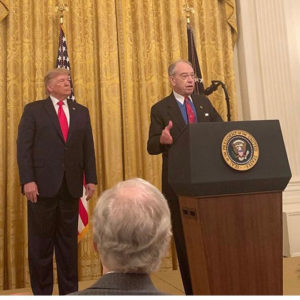 Senator Grassley posted this picture with President Trump on Instagram.

Iowa Senator Chuck Grassley was with President Trump at the White House yesterday to mark a milestone.

“We have a president that said he was going to run on a platform and he stands on that platform and you’ve particularly done it for judges,” Grassley said.

By the end of this week, one quarter of the judges on federal appeals court will have been appointed by President Trump. Trump invited Grassley to speak at yesterday’s event and Grassley mentioned the list of conservative prospects for court openings that Trump released during the 2016 campaign.

The U.S. Senate’s Democratic leader yesterday called Trump’s judicial nominees “the most radical and unqualified” judges the senate has confirmed in the past three decades.