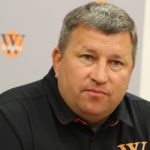 Wartburg will clinch a third straight American Rivers Conference title and an automatic spot in the NCAA Division III playoffs with a victory at Central on Saturday. The Knights are 8-0 and ranked seventh in the latest Division III Coaches Poll.

“This is a true championship game and something that we are excited to be part of”, said Wartburg coach Rick Willis. “We know it is going to be a great challenge like it always is when be play Central and play in games like this.”

“We have good team speed and we try focus on not giving up the big play”, added Willis. “If you can force a team to have to drive the field on you we have been fortunate to find a way to get them stopped most of the time.”

A Central win at the Dutch would need a victory in their season finale at Coe to clinch at least a tie for the title and the automatic bid to the playoffs.