You are here: Home / News / Reynolds embarks on 7-day trade mission to Japan 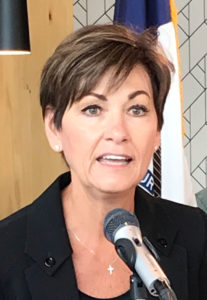 “It’s just to continue to drive markets and look for opportunity,” she says.

“We have Japanese companies that are located in Iowa,” Reynolds says. “They’re our third-largest trading partner.”

Iowa Ag Secretary Mike Naig, who is also on the trip,  says meeting with overseas customers in Japan is important.

“It is our top pork market by value. It is our top beef market. It’s our number two corn market and it’s our number three soybean market,” Naig says. “So Japan is a hugely-important country from an ag products standpoint for the United States, but specifically for Iowa.”

Naig indicated there will be a “heavy focus” during the trip on promoting Iowa beef and pork products.

“We’ll go to visit with distributors, we will get a chance to take a look at some of the retail locations,” Naig says. “And just get a sense of: What does the Japanese consumer want and how do they react to US products? We know it’s been a great market for us already. And so how do we continue to just build on that reputation for quality protein in the grocery store and on the menu in Japan?”

In September, President Trump and Japan’s prime minister signed a joint statement that reduced tariffs on agricultural goods and Naig says a full “free trade” agreement with Japan may not be far off. Reynolds says what’s already been agreed to is beneficial to Iowa pork and beef producers as well as corn growers.

“With that, it reduced the tariffs, so it makes us competitive with countries that are in the TPP,” Reynolds says, “so that’s good for us.”

Japan is one of a dozen countries with Pacific Ocean borders that signed the Trans-Pacific Partnership, slashing tariffs to foster trade among the group. In early 2017, President Trump withdrew the U.S. negotiations related to the TPP.

Representatives from Iowa commodity groups as well as people from Iowa’s business community are on the seven-day trade trip with Reynolds and Naig.