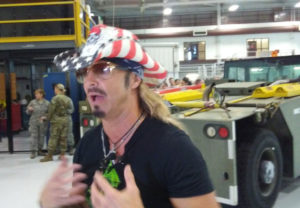 Brett Michaels at the 185th in Sioux City.

The former singer for Poison and reality TV star is bringing his Hometown Heroes concert tour to the Tyson Events Center tonight. “To be here with all these amazing men and women who give us such incredible freedoms…we got off the bus and it’s already been a great party. Everyone here has been amazing, and I am honored to be here and to thank them for the freedoms that they allow us,” Michaels says.

Michaels says this show will be extra special since it happens on the weekend leading up to Veterans Day. “And the best part of the night is during ‘Something to Believe In’ we bring our military men and women, our first responders, teachers, utility workers and fans. We grab a bunch of them and bring them up on stage — and it is awesome,” Michaels says.

Colonel Larry Christensen is one of the Hometown Heroes. “It’s a great opportunity to represent not only the 185th, but the Iowa National Guard, the people of the Siouxland Community, all the employers out there, and also all the veterans,” according to Christensen. “I was talking to him and I was thanking him for coming and I said ‘that’s a really great morale boost.’ He says ‘you don’t realize how much a of morale boost it is for his crew.’ So, he’s just as excited as we are.”