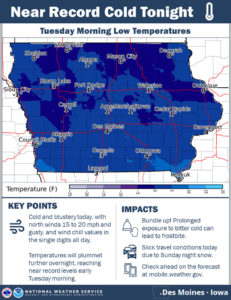 December 21st is -supposed- to be the first day of winter this year but a peek outside shows it’s already here.

Heavy snowfall overnight dropped almost a half-foot of flakes on some areas of the state and near-record cold temperatures are expected tonight. Meteorologist Kurt Kotenberg, at the National Weather Service, says much of the snowfall was concentrated between Highway 30 and Interstate 80.

“The Des Moines metro, here at the office in Johnston, we had 4.4 inches of snow,” Kotenberg says. “There’s a place in Benton County with 4.8 inches, Cedar Rapids had 5.8 inches. Spreading outwards from there, one to two inches as you get toward Fort Dodge, Waterloo had three-and-a-half inches.”

Some schools had late starts this morning due to the wintery weather, while many fender benders were reported across the state’s midsection as roads are very slick. Even where it’s stopped snowing, hazards remain. “We’ll continue to have winds going from north to south at around 15 to 25 miles-per-hour with gusts nearing 30 miles-an-hour here and there,” Kotenberg says. “That could cause blowing and drifting of snow, especially on untreated roadways, so definitely take it easy if you’re out there, if you’re traveling.”

The all-time record low temperature for this date at the Des Moines International Airport is four degrees, while the forecast for this evening calls for a low of three-degrees.  “We’re also going to have a little bit of wind speed so that’s going to bring the wind chills down to anywhere between zero and minus-ten degrees across much of Iowa,” Kotenberg says. “Towards the northern tier of counties, they’ll be in the minus-ten to minus-15 degree range. Not quite wind chill advisory but definitely hat and gloves and try to minimize the amount of time you spend outside.”

Forecasters says another wintery blast is predicted to arrive late Wednesday afternoon and into Thursday morning with the potential to drop another one-to-three inches of snow. Kotenberg says they’re still watching that developing storm to see exactly where the snow will fall and how much.