You are here: Home / News / Democrats Sanders and Ocasio-Cortez rally with Iowans 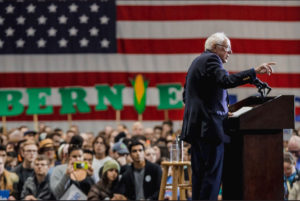 Vermont Senator and presidential hopeful Bernie Sanders is taking shots at the latest billionaire to consider jumping in the race.

“We say to Michael Bloomberg and other billionaires: ‘Sorry, you ain’t going to buy this election,'” Sanders said Saturday night.

On Friday, aides to former New York City Mayor Michael Bloomberg filed paperwork for Bloomberg to run in presidential primaries in Alabama and Arkansas. At a rally in Coralville, Sanders criticized Bloomberg’s reported plans to skip campaigning in the states that start the 2020 campaign.

“You’re not going to get elected president by avoiding Iowa,” Sanders said, and the audience cheered, as Sanders continued, “by avoiding New Hampshire, South Carolina and Nevada.”

Sanders called Bloomberg’s flirtation with a late entry into the 2020 race shows an “arrogance” that advertising rather than speaking directly voters is how to win the presidency.

“You’re not going to buy this election by spending hundreds of millions of dollars on media in California,” Sanders said in Coralville.

Sanders spent the weekend campaigning in Iowa with events in Orange City and Charles City Sunday. New York Congresswoman Alexandria Ocasio-Cortez joined Sanders for stops in Council Bluffs on Friday and in Des Moines and Coralville on Saturday. Ocasio-Cortez said she and Sanders are in solidarity with working people, not the elitists.

“When people try to accuse us of going too far left, we’re not pushing the party left. We are bringing the party home,” Ocasio-Cortez said, to cheers from the crowd in Coralville.

According to the campaign, more than 6000 people turned out to see Sanders and Ocasio-Cortez campaign in Iowa this weekend. Two other U.S. senators spent the weekend campaigning in Iowa. California Senator Kamala Harris made stops in Mason City and Fort Dodge. New Jersey Senator Cory Booker campaigned in Des Moines and Ames.