You are here: Home / News / A new president for the Iowa-based World Food Prize 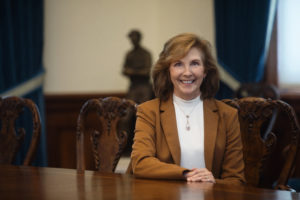 The co-founder of a non-profit who has been focused on international food safety and food security issues for the past decade will be the new leader of the Iowa-based World Food Prize Foundation. Iowa native and Nobel Prize winner Norman Borlaug founded the World Food Prize 33 years ago. The organization’s first president is retiring and Barbara Stinson will take over as World Food Prize president on January 4, 2020.

Stinson has been a senior partner at the Meridian Institute since she helped launch the non-profit in 1997.

“The organization specializes in developing collaborations and collaborative solutions to some of the world’s most challenging problems,” she said, “…bringing unusual partners together to try to tackle tough issues.”

Stinson has spent considerable time working in Africa to address the problems associated with aflatoxins — a fungus that contaminates corn, nuts and cotton.

“In the US, we have the benefit of having done a lot of research and developed technologies, tools and knowledge to control aflatoxin and while it’s here, it’s a problem — it’s controlled and managed,” Stinson said, “so the goal is to control and manage it on other continents.”

Stinson’s new job is to manage an organization that a variety of programs with a global reach, including an annual three-day event in Des Moines that attracts researchers and political leaders from around the globe.

“During my initial 100 days in the organization, I will be spending a lot of time with our key partners, listening, really trying to learn their perspectives on how the Borlaug Dialogues might evolve,” Stinson said.

Kenneth Quinn, a former U.S. Ambassador to Cambodia and one-time aide to Iowa Governor Robert Ray, has been the World Food Prize president for the past two decades.