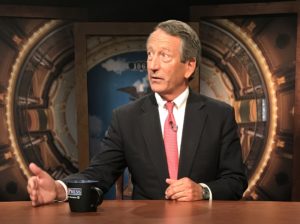 During a news conference on the steps of New Hampshire’s statement, Sanford said because of the impeachment fight, there is “no appetite” among Republicans for a “nuanced conversation” about the country’s mounting fiscal crisis. Sanford has warned the country is headed for a “financial storm” because of the spending decisions that are being made in Washington.

Sanford began making trips to Iowa late this summer, but he recently announced New Hampshire would be the home base for his long-shot campaign.